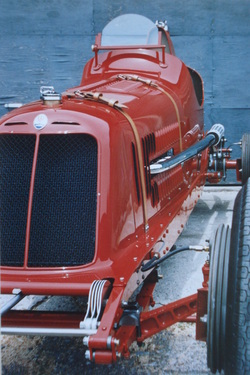 This car was originally owned by Count Luigi  Castlebarco of Italy, and was raced by him in the Voiturette class in the  1930's. Of the approximate dozen that were built, only a few remain.


This  very rare car had been disassembled by the previous owner and was bought in  parts. A new front suspension was fabricated including the axel and hubs, as an  updated independent front suspension from the next model Maserati had been  fitted. This car has been put back to its solid axle specifications as  originally produced.

The  body is a new manufactured body that precisely copies the original and is made  out of aluminium. It has the original engine, transmission, chassis and rear  axle with all numbers matching. We had wheels made of the original type, and the  tires are an early type race car tire. Due to the rarity of the vehicle, many of  the parts were sourced out of Italy. All parts are all exact copies of original  parts if not the original parts themselves. Many hours of research was done to ensure that the car was completed with all original specifications.